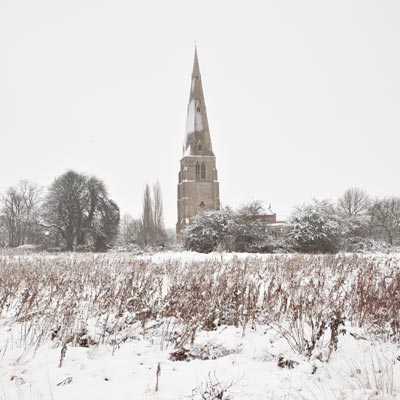 The launch of the latest version (version 6) of the magnificent Hauptwerk virtual pipe organ has stimulated me into producing a few recordings of Christmas music for fun, which are below. This software produces an incredibly realistic sound.

We kick off with ‘Hark the Herald Angels Sing’, which includes the descant for the final verse. It ends with the thunderous 32 foot Contra Posaune stop on Pedal, and the majestic 16 foot trombone on Great. Samples were taken of the organ in Salisbury Cathedral.

We move from the sound of the organ going nearly ‘full blast’ to the subtlety of ‘Silent Night’. I’ve played this piece on two organs. We start with the Salisbury Cathedral organ, where the cathedral acoustic is much in evidence. Then, we have the William Hill English organ, with a much drier, closer acoustic.

In the Bleak Mid Winter

We are spoilt for choice with the carol ‘In the Bleak Mid Winter’. Gustav Holst’s version appeared in The English Hymnal in 1906. Below is the version of the carol composed by Harold Darke. This is probably my favourite Christmas carol, and I love the words of the final verse. Samples are of the Salisbury Cathedral organ.

Here is the ‘Coventry Carol’ played on William Hill English organ. It’s rather a bleak sounding carol, with its minor key and slow, solemn tempo. I love it, particularly the change at the end to a major chord.

Here are four verses of ‘O Come All Ye Faithful’, complete with my favourite descant versions for verses three and four. Organ samples were recorded in Salisbury Cathedral.