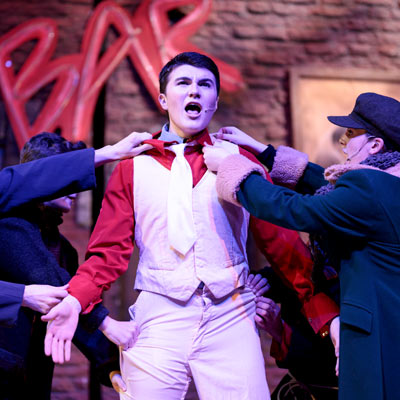 I had such grand ambitions for videoing the dress rehearsal of Sister Act by Spotlight Productions. In hindsight, these were totally unrealistic. After photographing the shows for several years, I felt quite confident with photography so video provided a new challenge.

I knew my set-up was not optimum at the time, as I was using three different 4k cameras (from different manufacturers). My daughters were there to help operate the cameras. I was not to know that extra lights had been brought in to supplement the existing lights in the Performing Art Centre. Sadly, these were not to broadcast standard and created a horrible flickering effect that ruined the vast majority of video footage. I’d hoped to capture all the show. I tried to rescue as much footage as possible, which left me with two numbers – ‘Sister Act’ and ‘I Could Be That Guy’.

The second major problem came with audio. I tried to read up online as much as possible. I knew recording of sound would be problematic. I thought I was being smart when I purchased cables necessary to connect my audio recorder directly to the mixing desk. Unfortunately, I hadn’t realised that the sound output from the desk was mixed in mono and that the wireless microphones used distorted and were prone to audio drop-outs.

Despite these setbacks, I produced the two videos below. I learnt a lot from the evening, and made radical changes to my equipment to have more control over the finished product, investing in identical cameras, microphones to be able to record audio separately from the mixing desk and broadcast-quality lighting. While I am far from satisfied with my first video attempts, they have proved popular on YouTube, achieving more than 4,000 views to date.

Other Posts About Spotlight Productions