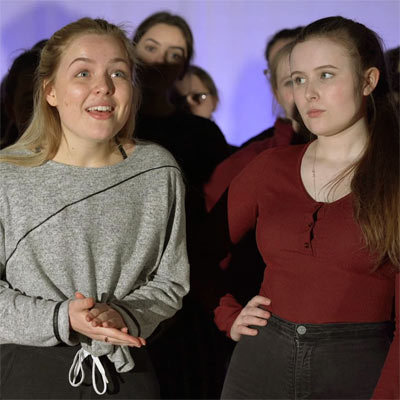 The month of March is very busy for my friends Graham and Sarah Wilkinson as they prepare to put on their annual musical at the Performing Arts Centre (PAC) at Hinchingbrooke School. My daughter Rebecca and I popped in to video some of the rehearsals for ‘Grease The Musical’ using three matched Sony 4k cameras. Two group numbers are shown below: ‘We Go Together’ and ‘Summer Nights’. Given my past experience of the dingy, yellowy lighting of the PAC (shown on the photo above), I employed two newly-purchased broadcast-standard Aputure Light Storm C120d II LED spotlights, and the colours and skin tones looked much more natural. We used two Rode NT5 microphones and it sounded pretty good given the poor acoustics in the PAC. In hindsight, we could have done with two vocal microphones for the two leads (Molly Robinson and Corben Johnson) in ‘Summer Nights’. I later invested in higher-power flood lights for colour washes.