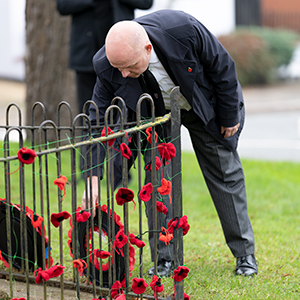 With an estimated 100,000 war memorials in the UK, memorials took place up and down the country on Remembrance Sunday to remember the fallen. In my local village, over 90 villagers gathered round the war memorial to remember those who made the ultimate sacrifice to secure our freedom. You can view the photos here:

I recently visited the Cambridge American Cemetery, which contains the remains of 3,811 American war dead. 5,127 names are recorded on the Walls of the Missing. This is the only military cemetery in the UK that commemorates American servicemembers and civilian volunteers who died in World War II.

Estimates for total deaths in the Second World War vary between 35 million and 60 million. Between 1941 and 1945, Nazi Germany and its collaborators systematically murdered six million Jews across German-occupied Europe  – around two-thirds of Europe’s Jewish population. I still vividly remember a visit to the Pinkas Synagogue in Prague’s Jewish Town where the 77,297 names of Holocaust victims are contained on the walls.

This year, the sights and sounds of wartime were recreated at the Battle of Britain air display at Duxford Air Museum in Cambridgeshire, which is Europe’s largest air museum.

As well as remembering the brave service people who directly took part in wars, it is important to also remember the huge contributions made ‘behind the scenes’ by so many. For example, I recently visited Bletchley Park. which was the principal centre of Allied code breaking during the Second World War. Alan Turing was a leading participant in the breaking of German ciphers. Historians estimate that Bletchley Park’s huge codebreaking operation shortened the war in Europe by as many as two to four years, saving 14 to 21 million lives.