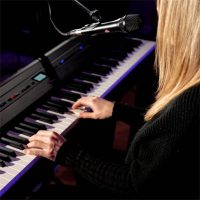 Local songwriter Angie Collins came in so I could video her performing a song she wrote, called ‘Broken’. While I have recorded several songs (sound only), it was nice to capture visuals as well. While sound recordings allow you to use large-condenser microphones, room treatment and portable isolation booths for better sound quality, video can be easier to share with others, particularly on social media. The video was recorded with four Sony 4k Ultra HD cameras, using broadcast-standard Aputure LED […] END_OF_DOCUMENT_TOKEN_TO_BE_REPLACED 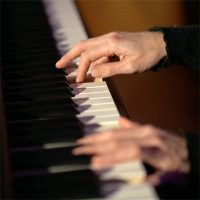 Known to many people in the local area, Angie is the regular pianist at our village Christmas carol singing event and teaches music at the local school. Angie also composes her own songs, being influenced by Carole King, Amy Winehouse and Nina Simone. I recorded two pieces on a Yamaha P-515 piano (replicating the Yamaha CFX grand piano). ‘Bête Noire’ was composed in the memory of her friend and pupil Ed Sloper, who died recently. The second piece was composed […] END_OF_DOCUMENT_TOKEN_TO_BE_REPLACED